Objective: Following this, revealing this interplay between these diseases may provide novel insights into the pathogenesis of such diseases.

Methods: Publications covering topics such as Ca2+ signalling, diabetes, depression and dementia (alone or combined) were collected by searching PubMed and EMBASE.

Results: The controlling of both neurotransmitters/hormones release and neuronal death could be achieved through modulating Ca2+ and cAMP signalling pathways (Ca2+/cAMP signalling). 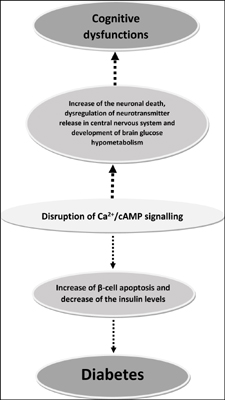