Background: Suaeda vermiculata is one of the widely distributed halophytes in central Saudi Arabia. The plant is used as a remedy for liver diseases, jaundice, and inflammation. S. vermiculata is also used as camels' food by local shepherds.

Purpose: The study aims to evaluate the behavioral antidepressant and anxiolytic effects of S. vermiculata aqueous and ethanol extracts.

Methods: Aqueous and ethanol extracts of S. vermiculata were prepared by the maceration technique. Standard forced swim test cylinder and light/dark chamber device were used to evaluate the antidepressant and anxiolytic activities of the extracts (200 mg/kg) in rats model, respectively.

Results: The aqueous and ethanol extracts of S. vermiculata showed remarkable antidepressant activity with significant increase in the swimming time and reduced immobility in the rats compared to imipramine treated animals (P<0.05). Ethanol extract increased the swimming time by 20% and decreased the immobility time by more than 60% compared to the control group of animals. In contrast, the extracts induced the anxiety behavior in experimental rats compared to vehicle- treated animals. The extracts significantly (P<0.001) reduced the time spent by rats in the light chamber by more than 50% and increased the time spent in dark chamber as compared with the control group and the group receiving diazepam.

Conclusion: The medicinally important plant S. vermiculata induced anxiety behavior with antidepressant activity in rats. These effects from our point of view are similar to the effects of some common beverages containing caffeine such as coffee and tea. 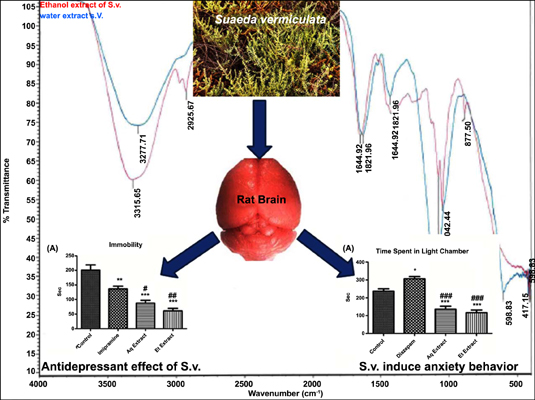